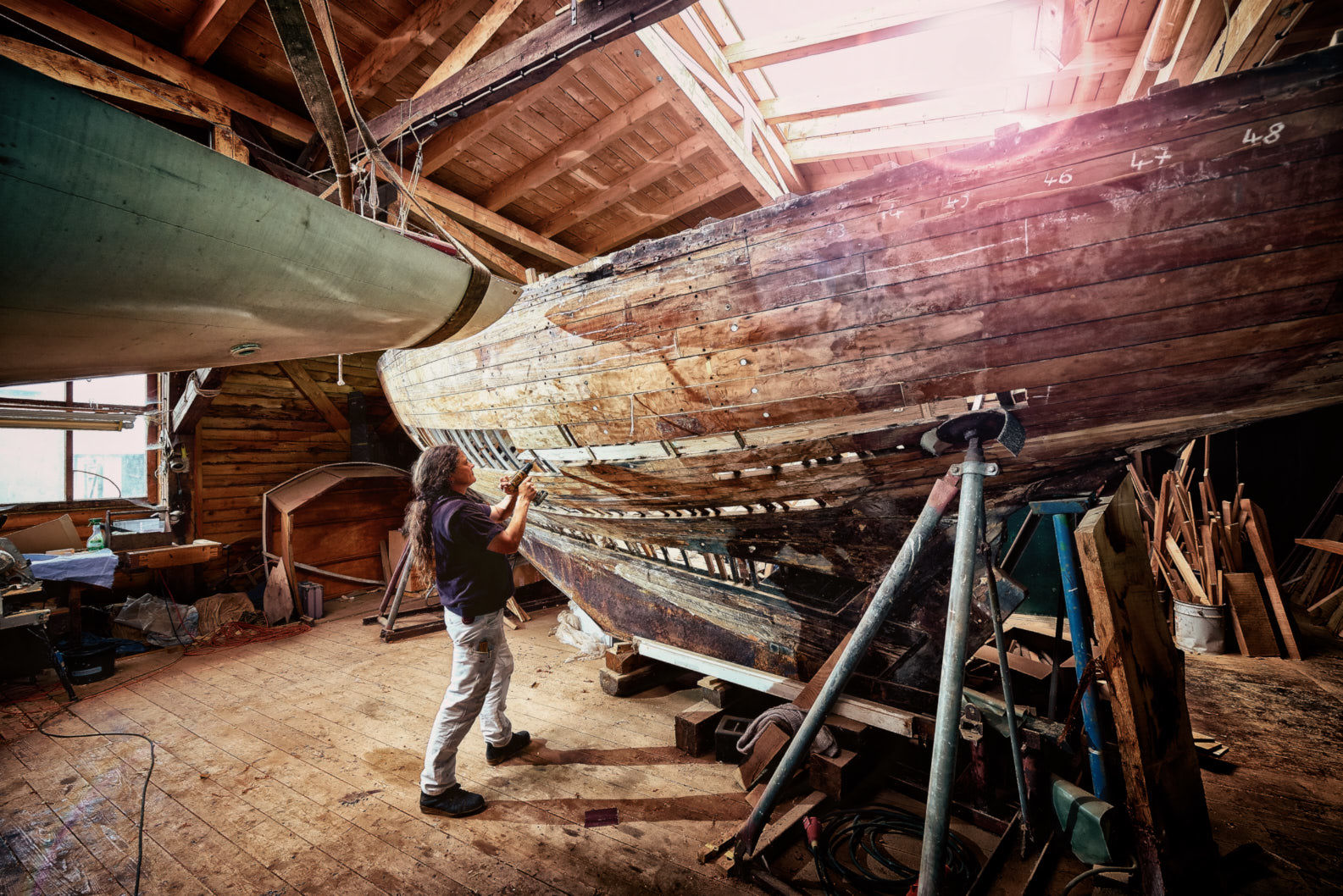 Kirsten Dubs at work in the boat yard in Freest 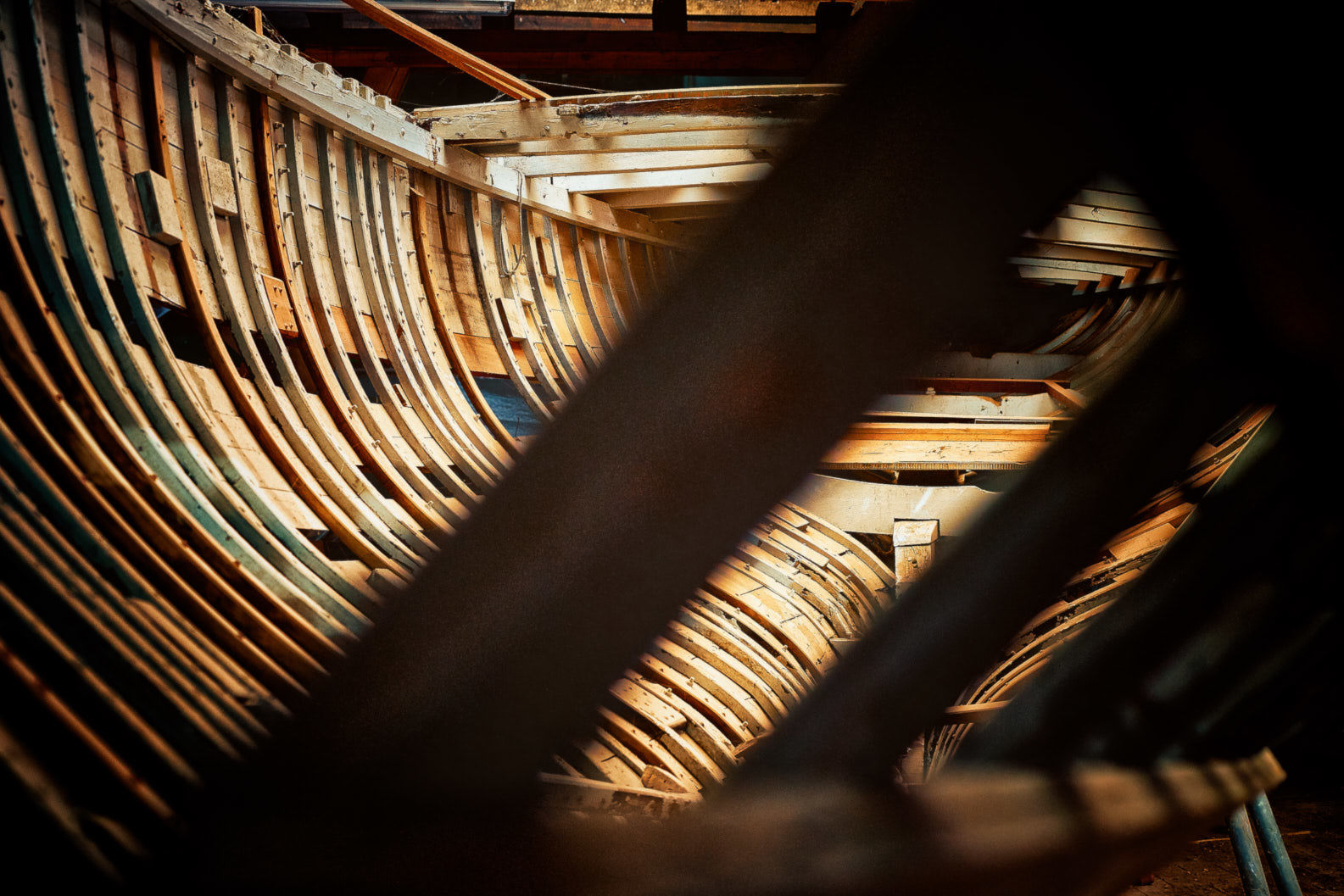 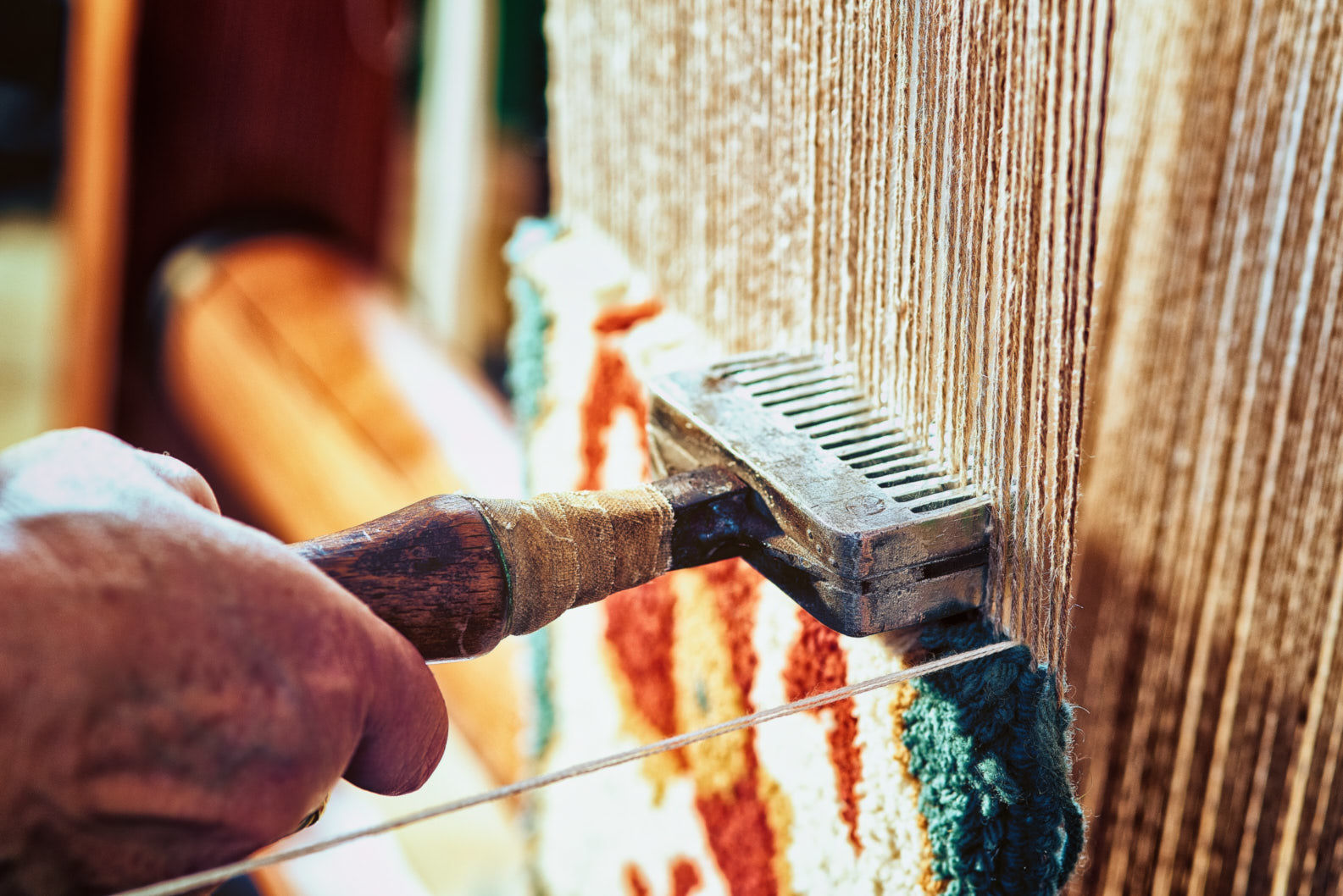 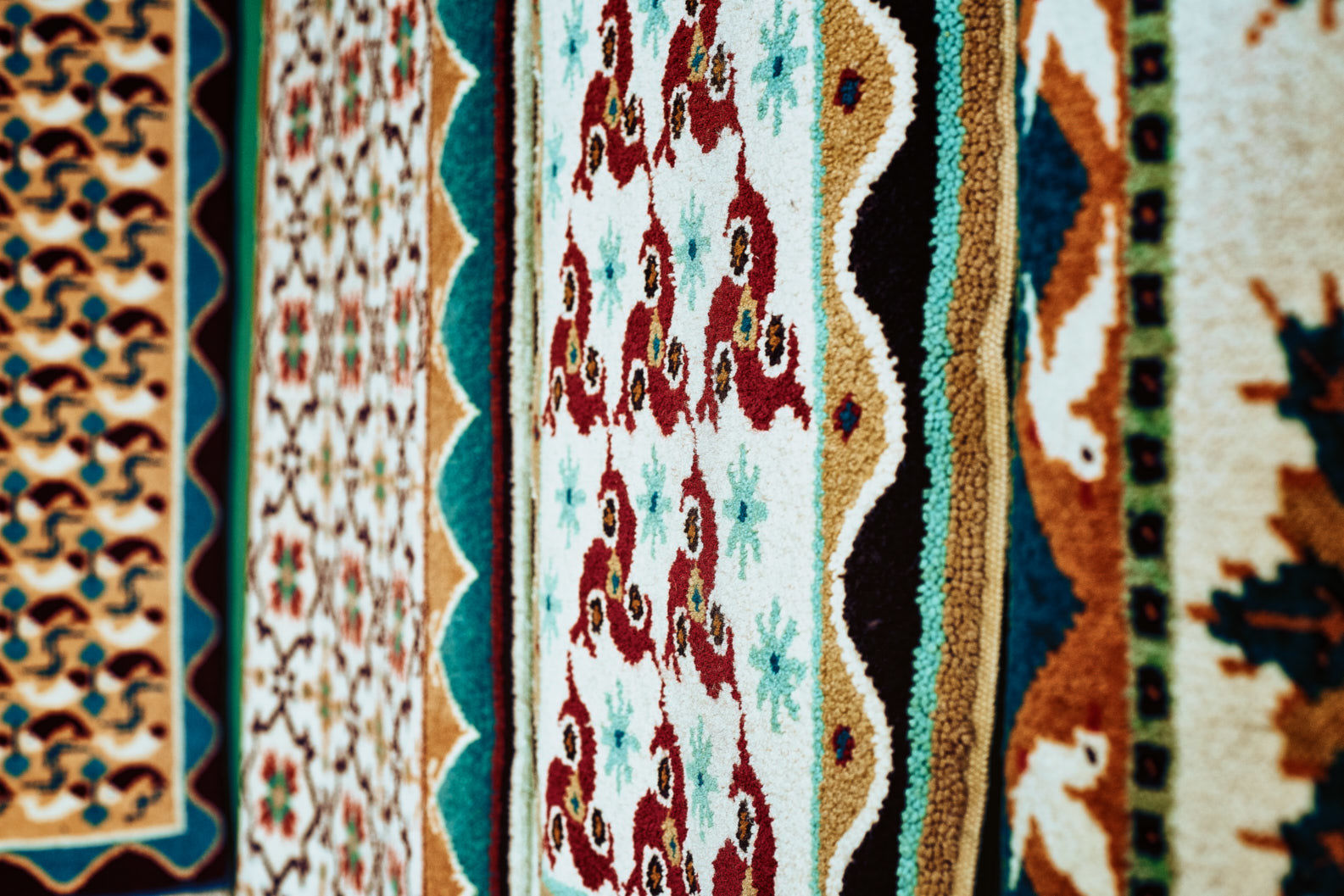 Fishermen's carpets in the local history museum of Freest

There are many small harbours in Vorpommern where you can admire them: wooden boats with a history. Each one is different and has its own special character. And if they could tell you everything they have lived through, they would probably be the most exciting storytellers in the whole country. These old treasures are to be kept alive, and that's what many small shipyards and boat builders with a passion for old boats are doing. Take a look behind the doors of the craft workshops during your Baltic Sea holiday. It' s where the oldies among the boats are rebuilt and made seaworthy again, and new boats are also created with great attention to traditional craftsmanship. Why not visit the factories and experience traditional maritime craftsmanship at a close quarters, for example at the over 100-year-old boatyard in Freest.

Many shipyards also offer sailing trips with their own nautical treasures for interested guests - definitely a highlight of your holiday at the Baltic Sea! For a special kind of excursion, board the Pomeranian cog UCRA in Ueckermünde. The cog was built according to historical models within the workshops of the Ukranenland in Torgelow. Allow yourself to be inspired and set sail, whether with a large traditional ship or a small sailing boat - fun and exciting stories are guaranteed!

The fishermen's carpets from Freest bear witness to a unique and almost lost handicraft with a touching history, which you should definitely try to uncover during your Baltic Sea holiday. After a ban on fishing was imposed on the southern Baltic Sea in 1928, the fishermen in the coastal villages of Vorpommern ended up without a source of income. Werner Kogge, the former district administrator, came up with the idea of simply letting the fishermen practise a different type of handicraft. True to the slogan: If you can weave nets, you can also knot carpets, he placed a cross-regional magazine ad looking for someone who could teach the fishermen that craft. The Austrian Rudolf Stundl was a real stroke of luck for the fishermen of the region. He quickly understood that the fishermen would not become successful if they simply copied the well-known motifs of oriental carpets. He therefore worked with the fishermen to develop a very special knotting technique and unique patterns and symbols based on the coastal regions of Vorpommern.  An independent handicraft began to develop and establish itself, so that it continued to exist even after the ban on fishing was lifted and manufacturing was carried on until 1992. Since the closure of the manufacturing cooperative "Volkskunst an der Ostsee" (Folk Art on the Baltic Sea), the carpets have only been made by private women knotters. Collections of the carpets can be observed in the Museum of Local History in Freest, in the Museum of Urban History in Wolgast and in the Custody of the University of Greifswald. You should definitely stop by and have a look at this collection on your next Baltic Sea holiday. 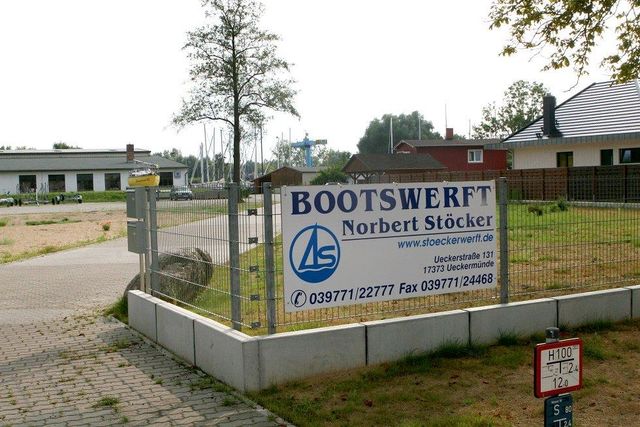 The Norbert Stöcker boatyard has 40 water berths for yachts of up to 14 metres in length on the Uecker river, about one sea mile upstream of the Uecker estuary.
read more now 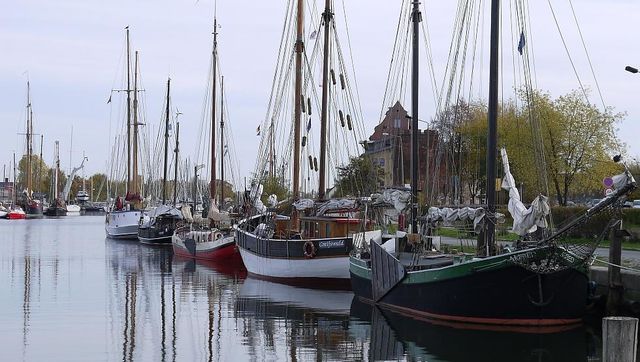 Gaff ketch and schooner, seaquat and ramship, cruiser and kragejolle - about 45 old ships characterise the image of the museum harbour in Greifswald, which was founded in 1991 following the example of the museum harbours in Flensburg and Hamburg. With this, the Hanseatic townspeople reacted to the increased interest in historic ships and traditional seamanship.
read more now 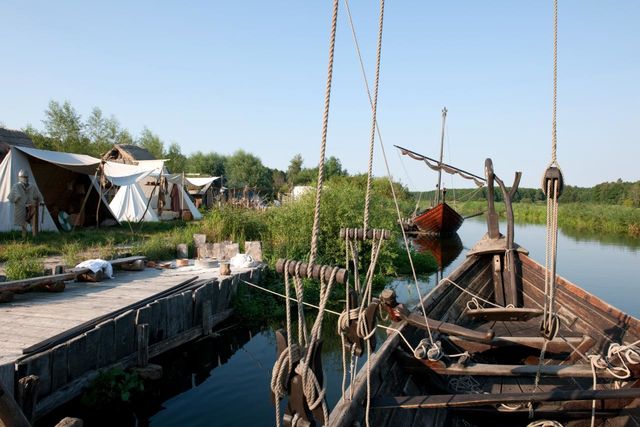 The outdoor museum 'Ukranenland' is openend daily from 10am-5pm from May to October. It is the reconstruction of a Slavic settlement of the 9th/10th century on the 'Ueckerwiesen' at the edge of town.
read more now